The Old Mill Past and Present 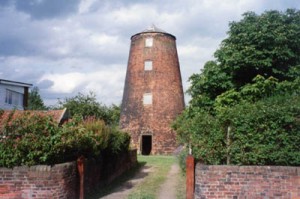 There were tower mills in Suffolk from the 13th Century but it wasn’t until the 19th Century that their numbers increased, and Blundeston was one of these.
Located at the southern end of The Street, Ben Jackson had the mill and Mill House built in about 1820, using bricks made of clay from the same plot. The round mill tapered to 14 feet in diameter at the top. It had patent sails and two pairs of French millstones.
The corn came mainly from the village and surrounding area. It has been suggested that some would have been transported along the River Waveney to the Square Bowl, a cut on the river bank, where Wherries could tie up. The corn would then be transported across the marshes via Nebb Lane to the village. In addition to the house and mill there was a granary store, barn, cart sheds and stables.
In May 1841 the mill and house were sold by auction, the Bill of Sale advertised “To Millers and Capitalists”. They were sold because the owner John Jackson, probably a relative of Ben Jackson, was about to retire.
Thomas Cooper, a young man of 24 from Great Yarmouth, bought the mill and house for £950 and put down a deposit of £190. Thomas was also a baker and for many years was both miller and baker in Blundeston. He was still operating as such in 1904 but, as he was by now in his eighties, the work may have been done by his sons George and Arthur. After his death they continued working the mill until 1922.

The sails were removed and the mill and house were sold to Abbey Beare, a local timber merchant; gradually the disused mill fell into disrepair.
Patrick Paul bought the house and grounds in 1951, unaware that the purchase included a mill! Apart from extending the house at the rear to provide accommodation for his wife and 5 children, he preserved as best he could the mill and outbuildings. There was also a fairly extensive orchard at the back of the grounds.
It was around 1960 that I first visited the mill. I was friendly with Michael Paul (one of Patrick’s sons) who was in the same class as me at Lowestoft Grammar School (now Denes High). At that time the mill had no roof, but there was a long rope suspended from a beam high up in the structure. We used to swing on the rope using our feet to prevent us crashing into the walls. Mrs Paul used to warn us to take care, but this was mostly disregarded – after all, we were only about 12 years old! I must have been attracted to the place as I used to cycle there from Pakefield.
On his retirement in 1981 Patrick prevented further decay by re-roofing the mill. As he was a competent woodworker, he designed and assembled all the structure himself.
In April 1990 Sidney Cooper of Church Road died. His father Arthur was the last person to own and work the mill. Patrick Paul died in December 2002 and in the following July the mill and house were sold. At about that time millstones, thought to have come from Blundeston, were found in a garden at Corton and offered to the new owner.
Considerable internal renovation has been carried out at Mill House. The old kitchen, with a lath and reed ceiling, was demolished and replaced with a larger one and the roof of the extension was also altered.
Written by Ken Ward (with thanks to the authors of “Blundeston – A Village History”